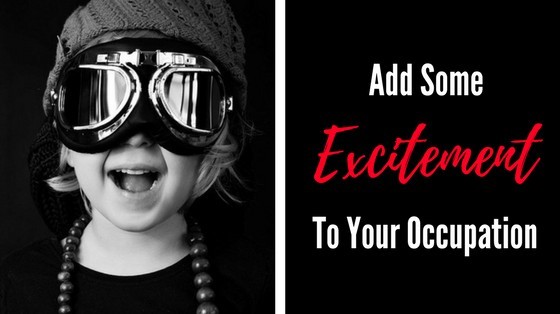 Add Some Excitement to Your Occupation

Ask any four-year-old what they want to be when they grow up and they’ll tell you something glamorous or exciting.

Over the years my son has declared he wants to be a ballet dancer, a dirtbike rider, a fireman, a policeman and currently he wants to be a SUPERHERO.  When I was little, I wanted to be an actress or dancer. I was going to be FAMOUS.

When did we give up on our childhood dreams?  Or have we?

Even though I’ll probably never be an actress, I figure I can grow my Star another way. When I finally publish my book I may achieve some of the fame and fortune I always craved as a little girl.

If you’re disappointed you chose a boring career over a longheld fantasy, then this contributed post was written just for you.

Add Some Excitement to Your Occupation: Four Roles to Consider

For most of us, work is a way to pay the bills – and it’s not always the most exciting place to be. If you’re sat in an office, in a shop or in a factory you might find that boredom and monotony are a huge part of your workday.

However it doesn’t have to be this way, and if you need some excitement in your life then you can definitely add some to your career.

Choose the right job and not only will you no longer suffer workplace boredom and feel like you’re wasting your life away, but it could be rewarding and you could genuinely help people. Here are some ideas.

Working for the police doesn’t have to just mean being a bobby on the beat. You could work as a dog handler, or as a traffic officer driving and be catching criminals at high speeds.

You could work as a forensic investigator, tracking and profiling individuals. It’s rewarding as you get to help victims, prevent crime and bring justice. But it’s also exciting when you’re dealing with crime anything could happen. It’s a role that will keep you sharp and will get the adrenaline pumping.

If you’re looking for a role that’s always different and is a constant go, then emergency healthcare could be one to consider. You could be a paramedic or ambulance driver, an A&E worker, you could even work for the air ambulance – http://www.airevacinternational.com/careers/ explains more.

Emergency healthcare roles aren’t for the faint-hearted, but if you’re great under pressure, care about people and want a role that’s highly stimulating and rewarding then this could well be for you. When you own your own business, you get to spend your time working on something that matters to you. Instead of earning money for someone else you work for yourself, building something from the ground up.

Watching your venture grow can be incredibly exciting, not in the sense of the adrenaline pumping on a daily basis but it’s certainly rewarding and fun to see what you will achieve next.

Many of the world’s largest companies were started from home, so you don’t even need a huge budget to begin. Just a great idea and lots of hard work.

If you’ve previously worked in a role such as the police, military or a psychology based position then private investigation could be a fantastic way to go. Investigators could be working on anything from fraud cases to missing people.

You could be working for individuals wanting to know if their spouse is cheating, or working for your local council or the government trying to catch criminals.

You need to be able to keep your cool in any given situation, and the fact that it’s different with every case makes it extremely interesting.

Let’s be honest, we’ve all read spy novels and watched things on tv with private investigators and have thought of ourselves in the role at one time or another!

What could you do today to add some excitement to your current occupation?  Or do you have to do a complete about turn to add excitement to your working life?   It’s never too late to have a happy childhood, right?  Let’s do this!

6 thoughts on “Add Some Excitement to Your Occupation: Four Roles to Consider”